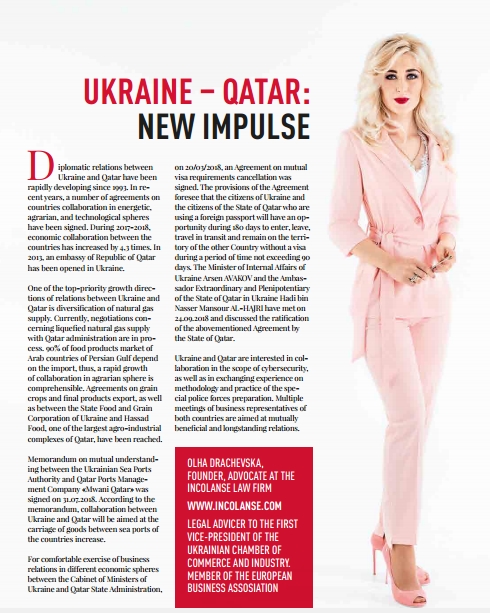 Diplomatic relations between Ukraine and Qatar have been rapidly developing since 1993. In recent years, a number of agreements on countries collaboration in energetic, agrarian, and technological spheres have been signed. During 2017-2018, economic collaboration between the countries has increased by 4,3 times. In 2013, an embassy of Republic of Qatar has been opened in Ukraine.

One of the top-priority growth directions of relations between Ukraine and Qatar is diversification of natural gas supply. Currently, negotiations concerning liquefied natural gas supply with Qatar administration are in process. 90% of food products market of Arab countries of Persian Gulf depend on the import, thus, a rapid growth of collaboration in agrarian sphere is comprehensible. Agreements on grain crops and final products export, as well as between the State Food and Grain Corporation of Ukraine and Hassad Food, one of the largest agro-industrial complexes of Qatar, have been reached.

Memorandum on mutual understanding between the Ukrainian Sea Ports Authority and Qatar Ports Management Company «Mwani Qatar» was signed on 31.07.2018. According to the memorandum, collaboration between Ukraine and Qatar will be aimed at the carriage of goods between sea ports of the countries increase.

For comfortable exercise of business relations in different economic spheres between the Cabinet of Ministers of Ukraine and Qatar State Administration, on 20/03/2018, an Agreement on mutual visa requirements cancellation was signed. The provisions of the Agreement foresee that the citizens of Ukraine and the citizens of the State of Qatar who are using a foreign passport will have an opportunity during 180 days to enter, leave, travel in transit and remain on the territory of the other Country without a visa during a period of time not exceeding 90 days. The Minister of Internal Affairs of Ukraine Arsen AVAKOV and the Ambassador Extraordinary and Plenipotentiary of the State of Qatar in Ukraine Hadi bin Nasser Mansour AL-HAJRI have met on 24.09.2018 and discussed the ratification of the abovementioned Agreement by the State of Qatar.

Ukraine and Qatar are interested in collaboration in the scope of cybersecurity, as well as in exchanging experience on methodology and practice of the special police forces preparation. Multiple meetings of business representatives of both countries are aimed at mutually beneficial and longstanding relations.